Quaternity. An image with a four-fold structure, usually square or circular and symmetrical; psychologically, it points to the idea of wholeness. 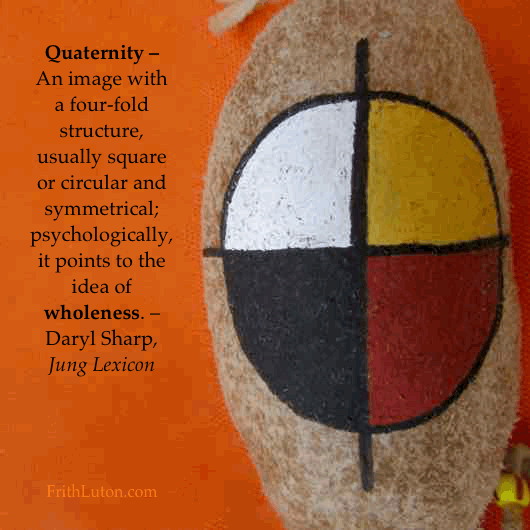 The quaternity is one of the most widespread archetypes and has also proved to be one of the most useful schemata for representing the arrangement of the functions by which the conscious mind takes its bearings. [See typology.] It is like the crossed threads in the telescope of our understanding. The cross formed by the points of the quaternity is no less universal and has in addition the highest possible moral and religious significance for Western man. Similarly the circle, as the symbol of completeness and perfect being, is a widespread expression for heaven, sun, and God; it also expresses the primordial image of man and the soul. [“The Psychology of the Transference,” CW 16, par. 405.]

Quaternity Image as a Contextual Framework

From the circle and quaternity motif is derived the symbol of the geometrically formed crystal and the wonder-working stone. From here analogy formation leads on to the city, castle, church, house, and vessel. Another variant is the wheel (rota). The former motif emphasizes the ego’s containment in the greater dimension of the self; the latter emphasizes the rotation which also appears as a ritual circumambulation. Psychologically, it denotes concentration on and preoccupation with a centre. [“The Structure and Dynamics of the Self,” CW 9ii, par. 352.]

Jung believed that the spontaneous production of quaternary images (including mandalas), whether consciously or in dreams and fantasies, can indicate the ego’s capacity to assimilate unconscious material. But they may also be essentially apotropaic, an attempt by the psyche to prevent itself from disintegrating.

These images are naturally only anticipations of a wholeness which is, in principle, always just beyond our reach. Also, they do not invariably indicate a subliminal readiness on the part of the patient to realize that wholeness consciously, at a later stage; often they mean no more than a temporary compensation of chaotic confusion. [“The Psychology of the Transference,” CW 16, par. 536.]