Psychosis. An extreme dissociation of the personality. Like neurosis, a psychotic condition is due to the activity of unconscious complexes and the phenomenon of splitting. In neurosis, the complexes are only relatively autonomous. In psychosis, they are completely disconnected from consciousness. 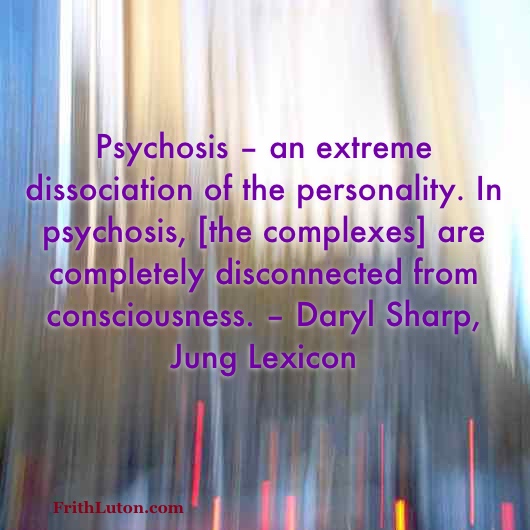 To have complexes is in itself normal; but if the complexes are incompatible, that part of the personality which is too contrary to the conscious part becomes split off. If the split reaches the organic structure, the dissociation is a psychosis, a schizophrenic condition, as the term denotes. Each complex then lives an existence of its own, with no personality left to tie them together. [“The Tavistock Lectures,” CW 18, par. 382.]

[In schizophrenia] the split-off figures assume banal, grotesque, or highly exaggerated names and characters, and are often objectionable in many other ways. They do not, moreover, co-operate with the patient’s consciousness. They are not tactful and they have no respect for sentimental values. On the contrary, they break in and make a disturbance at any time, they torment the ego in a hundred ways; all are objectionable and shocking, either in their noisy and impertinent behaviour or in their grotesque cruelty and obscenity. There is an apparent chaos of incoherent visions, voices, and characters, all of an overwhelmingly strange and incomprehensible nature. [“On the Psychogenesis of Schizophrenia,” CW 3, par. 508.]

Jung believed that many psychoses, and particularly schizophrenia, were psychogenic, resulting from an abaissement du niveau mental and an ego too weak to resist the onslaught of unconscious contents. He reserved judgment on whether biological factors were a contributing cause.