Personality. Aspects of the soul as it functions in the world. (See also individuality.)

For the development of personality, differentiation from collective values, particularly those embodied in and adhered to by the persona, is essential. 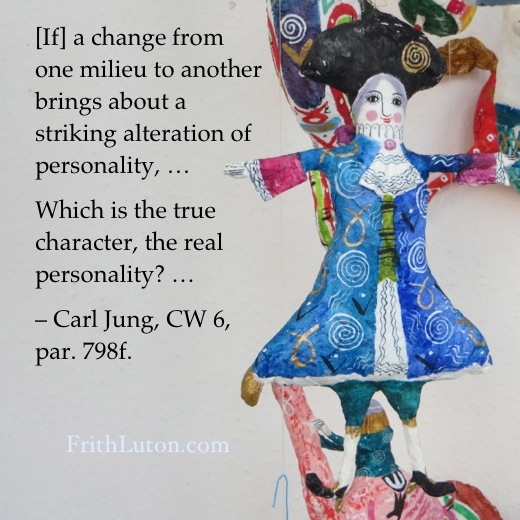 A change from one milieu to another brings about a striking alteration of personality, and on each occasion a clearly defined character emerges that is noticeably different from the previous one. … The social character is oriented on the one hand by the expectations and demands of society, and on the other by the social aims and aspirations of the individual. The domestic character is, as a rule, moulded by emotional demands and an easy-going acquiescence for the sake of comfort and convenience; when it frequently happens that men who in public life are extremely energetic, spirited, obstinate, wilful and ruthless appear good-natured, mild, compliant, even weak, when at home and in the bosom of the family. Which is the true character, the real personality? …

… In my view the answer to the above question should be that such a man has no real character at all: he is not individual but collective, the plaything of circumstance and general expectations. Were he individual, he would have the same character despite the variation of attitude. He would not be identical with the attitude of the moment, and he neither would nor could prevent his individuality from expressing itself just as clearly in one state as in another. [“Definitions,” CW 6, pars. 798f.]