Concretism. A way of thinking or feeling that is archaic and undifferentiated, based entirely on perception through sensation. (Compare abstraction.)

Concretism as a way of mental functioning is closely related to the more general concept of participation mystique. Concrete thinking and feeling are attuned to and bound by physiological stimuli and material facts. Such an orientation is valuable in the recognition of outer reality, but deficient in how it is interpreted.

Concretism results in a projection of … inner factors into the objective data and produces an almost superstitious veneration of mere facts. [“Definitions,” CW 6, par. 699.] 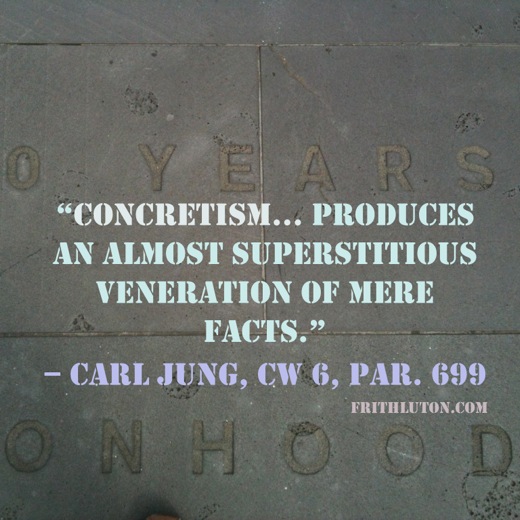 [Concrete thinking] has no detached independence but clings to material phenomena. It rises at most to the level of analogy. Primitive feeling is equally bound to material phenomena. Both of them depend on sensation and are only slight differentiated from it. Concretism, therefore, is an archaism. The magical influence of the fetish is not experienced as a subjective state of feeling, but sensed as a magical effect. That is concretistic feeling. The primitive does not experience the idea of the divinity as a subjective content; for him the sacred tree is the abode of the god, or even the god himself. That is concretistic thinking. In civilized man, concretistic thinking consists in the inability to conceive of anything except immediately obvious facts transmitted by the senses, or in the inability to discriminate between subjective feeling and the sensed object. [Ibid., par. 697.]