What is it, asks Jung, that induces one to rise out of unconscious identity with the mass as out of a swathing mist? He suggests that it is due to many and various irrational factors, but particularly to something commonly called a vocation:

True personality is always a vocation and puts its trust in it as in God, despite its being, as the ordinary man would say, only a personal feeling. But vocation acts like a law of God from which there is no escape. The fact that many a man who goes his own way ends in ruin means nothing to one who has a vocation. He must obey his own law, as if it were a daemon whispering to him of new and wonderful paths. [“The Development of Personality,” The Development of Personality, CW 17, par. 299] 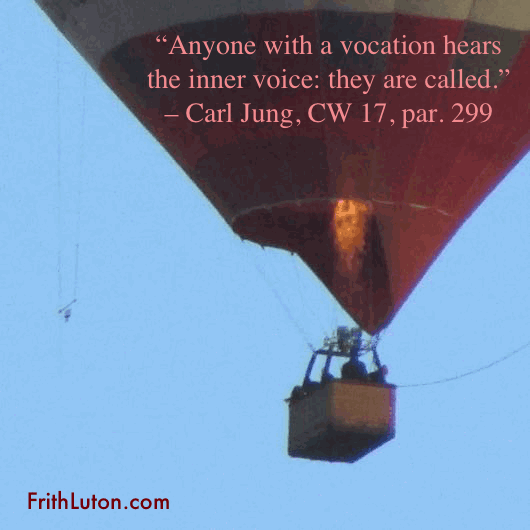 Having a vocation originally meant ‘to be addressed by a voice.’ Examples of this are ubiquitous in the writings of the Old Testament prophets.

When I was in Zurich training to be an analyst I listened for that voice. Was analytic work truly my personal vocation? If the voice called, would I hear? What if it did not? Or, almost worse, what if it did? I was mindful of the way Samuel, as told in the Bible, became one of the elect:

And it came to pass at that time … ere the lamp of God went out in the temple of the Lord, where the ark of God was, and Samuel was laid down to sleep;

That the Lord called Samuel: and he answered, Here am I.

And he ran unto Eli, and said, Here am I; for thou calledst me. And he said, I called not; lie down again. …

And the Lord called yet again, Samuel. And Samuel arose and went to Eli, and said, Here am I; for thou didst call me. And he answered, I called not, my son; lie down again. …

And the Lord called Samuel again the third time. And he arose and went to Eli, and said, Here am I; for thou didst call me. And Eli perceived that the Lord had called the child.

Therefore Eli said unto Samuel, Go, lie down: and it shall be, if he call thee, that thou shalt say, Speak, Lord; for thy servant heareth. So Samuel went and lay down in his place.

And the Lord came, and stood, and called as at other times, Samuel, Samuel. Then Samuel answered, Speak ; for thy servant heareth. [1 Sam. 3: 2-10, Authorised Version]

That’s more or less what happened to me. One night I distinctly heard my name called, not once but thrice, and then again.

I was ripe for holy orders before I heard my housemate Arnold snickering behind the door. We had a good old pillow fight then. Puers at heart. But having already accepted that God—a.k.a. the Self—moves in mysterious ways, it was not a great leap of faith to imagine my feckless friend as His unwitting messenger. Jung:

Vocation, or the feeling of it, is not, however, the prerogative of great personalities; it is also appropriate to the small ones all the way down to the ‘midget’ personalities, but as the size decreases the voice becomes more and more muffled and unconscious. It is as if the voice of the daemon within were moving further and further off, and spoke more rarely and more indistinctly. The smaller the personality, the dimmer and more unconscious it becomes, until finally it merges indistinguishably with the surrounding society, thus surrendering its own wholeness and dissolving into the wholeness of the group. [CW 17, par. 302]

The ‘wholeness of the group’ sounds like an oxymoron, but it is not; it simply designates our original state of unconsciousness, the participation mystique that we all wallow in before we have differentiated ourselves from the collective.

Differentiation is necessary because the call to become whole is not heard en masse. In any group the inner voice is drowned out by convention, and one’s personal vocation is overwhelmed by collective necessity.

The primary question in speaking of vocation is always, “Do you know who you are? Are you living your own way?”

Caveat: In modern times, Goethe and Napoleon heeded inner voices that fuelled their sense of personal destiny. So did Hitler and Stalin, and so do many others diagnosed as psychotic, which just goes to show that inner voices aren’t necessarily benign. Their interpretation depends on a discriminating consciousness in those who hear them.