Home » Articles » What is Synchronicity? – a Jungian definition

Synchronicity – A phenomenon where an event in the outside world coincides meaningfully with a psychological state of mind.

Synchronicity … consists of two factors: a) An unconscious image comes into consciousness either directly (i.e., literally) or indirectly (symbolized or suggested) in the form of a dream, idea, or premonition. b) An objective situation coincides with this content. The one is as puzzling as the other. [“Synchronicity: An Acausal Connecting Principle,” ibid., par. 858.] 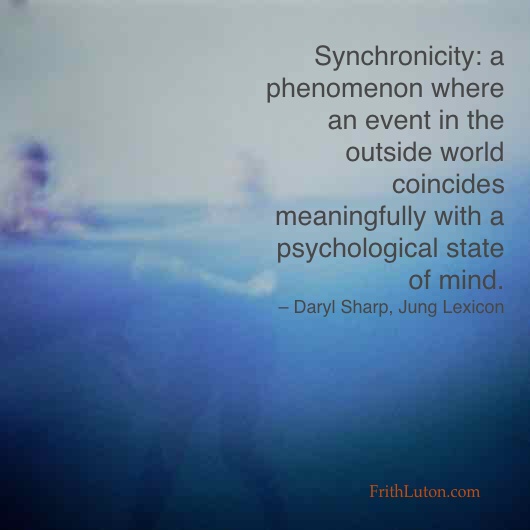 Jung associated synchronistic experiences with the relativity of space and time and a degree of unconsciousness.

The very diverse and confusing aspects of these phenomena are, so far as I can see at present, completely explicable on the assumption of a psychically relative space-time continuum. As soon as a psychic content crosses the threshold of consciousness, the synchronistic marginal phenomena disappear, time and space resume their accustomed sway, and consciousness is once more isolated in its subjectivity. … Conversely, synchronistic phenomena can be evoked by putting the subject into an unconscious state. [“On the Nature of the Psyche,” CW 8, par. 440.]

Synchronicity was defined by Jung as an “acausal connecting principle,” an essentially mysterious connection between the personal psyche and the material world, based on the fact that at bottom they are only different forms of energy.

It is not only possible but fairly probable, even, that psyche and matter are two different aspects of one and the same thing. The synchronicity phenomena point, it seems to me, in this direction, for they show that the nonpsychic can behave like the psychic, and vice versa, without there being any causal connection between them. [Ibid., par. 418.]

Commentary: To clarify, or rather, to simplify this definition: A synchronistic event is said to have occurred when a person is thinking of something, and then, almost immediately, they notice something else that seems to have a meaningful connection to what they were just thinking or feeling. Often this ‘meaningful connection’ means that the event, the thing they notice, such as a butterfly landing on their window, seems to have a meaningful message to illuminate what they were pondering moments earlier.

Next article in this series:  Synchronicity 4